Due to Extenuating Circumstances

Archive for the tag “#tantrums” 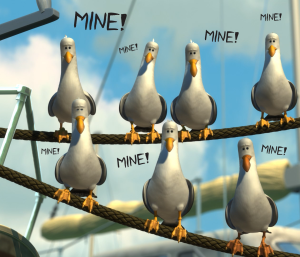 Mac and I have had no idea why the switched flipped and our son transformed into Suboptimal Prime. He started the Terrible Two’s about 6 weeks ago and absolutely anything within reach of his adorable little fists is now “MINE!” There is no thought process to determine why it’s his or why he wants it; it’s just his. His favorite toy this week is an empty, rinsed 1/2 gallon milk jug. He fished it (see, Seagull! I told you so) out of recycling and now Milk Jug is a beloved companion. Milk Jug goes all over our house. It doesn’t come with us to Grandma’s because Son of Milk Jug resides with her.

May the good Lord protect and comfort you if you try to take away Milk Jug. Eddie immediately throws his head back, drops to the floor in protest and then screams “MIIIINE! MIIIIINE!” until Milk Jug or another distraction comes along.

The baffling part is where he got the word. It’s not like Mac and I roam around the house every day announcing possession of worldly goods. “My meatloaf! My panty liners! Our new water softener that cost $250 to install so don’t kick it!” Hell, I’m listening to Mac deal with our son right now. Outside our bedroom door he’s arguing that while he concedes that a bottle with a nipple on top could be, de facto, Eddie’s bottle, Eddie still can’t scream “MINE!” insofar as we won’t let him drink the rotten milk inside said bottle. We’re mean like that.

Our biggest struggle is the cat. Of course you knew this. It’s always the cat.

Oscar will tolerate a few seconds of Eddie’s hugs and petting, even kisses on the nose. But then it’s too much, and Oscar takes a swipe at him. Ordinarily I’d concede that Oscar is his own man (own cat? Own feline?) and, as such, has complete bodily autonomy. But.

Eddie looks so cute kissing him.

Sigh. Oscar is HIS!

I don’t know what’s happened. This was sudden, it was unexpected, it’s completely off-the-charts, not to mention off of the timeline we thought we were following.

Baby is 16 months, and, I say this with love, he has become a total jerk.

Seriously! Not even two weeks ago we had a sunny little boy, who loved to pet the cat, take long naps, and have Daddy throw him the air while Mommy shouted “wheeeeee!” and tried to take pictures. Not that long ago he loved new food, scooting around and meeting people. It was the perfect time to enroll him in his new daycare. Uh, sorry. Learning Center…and they do insist that a child my son’s age is better off at a Learning Center, capital L and Capital C.  Then one day, the kid Mac brought home from the daycare Learning Center was, well, an asshole!

He shouts like the world is ending when you lay him down for a diaper change. He DOES NOT DO baby food anymore, even his old favorites like turkey and rice. Feeding him is not happening. Baby feeds himself or baby won’t be eating today, thanks. When he’s done, he violently pushes away or drops it all on the floor. If he doesn’t like what you gave him, floor. Less than two weeks ago I had the world’s least fussy eater! Where did THAT KID go?

Navigating entertainment is a nightmare. Wrong episode of The Wiggles? Lock Mommy in the Tower of London. At this very second, I’m listening to the baby scream a high-pitched whine because Daddy only read the football book twice, not three times. It’s almost comical when he wants to look out the living room window but I’m the only one home. I can’t hold him up there to see out well, but he can look at all the same stuff if I open his nursery blinds and he can stand in his crib. But that’s not the window he wants, Mommy, you incompetent piece of trash.

Again, I can hear him screaming at Mac right now. This time it’s because he can’t have a taste of whatever Mac is drinking; Glenfiddich, if Mac’s smart.

The Baby found a wooden rod that’s held to play a bodhran, a traditional Irish drum. Baby screamed for 20 minutes when he was not allowed to use the cat as a drum.

He kicks violently if he wants to do something dangerous, like fall down a flight of stairs, and you stop him.

He dropped our Roku remote in a glass of ice water.

He screams incessantly when put down for a nap, even if he is so tired he has drooped his little head to lay down on the living room rug.

Baby damned near broke Mac’s nose hurling himself at Daddy during a temper tantrum, then threw ANOTHER tantrum that while Daddy assessed the damage Baby wasn’t allowed to rip out the hearing aids Daddy desperately needs to avoid being dependent on mime and ASL.

He’s angry we won’t let him inhale and draw things with Sharpies. He screams when he throws something on the ground, it gets left there to discourage that, so he throws more at it in a misguided attempt to make things better.

Baby is angry The Wiggles only sent 78 episodes to the US with Simon in them. He freaks the hell out over Simon. If anybody happens to know Simon of the Wiggles, please tell him he’s welcome to come sleep with me, or Mac, or both of us if that’s his thing, if he will only keep my kid occupied until Baby’s 3rd birthday.

Is it ethical to give a 16 month old a little Benedryl to make him sleep? I’m asking for a friend.

Finally…where did my baby go? The little bundle who shook his whole body with glee when he heard the straps of my velcro; the sound that always meant Mommy’s here, and she’s going to pick you up and we’ll have great adventures together. Is he coming back? Even in a bigger format, I miss the baby who loved his father, his Oscar (“ar! Gar!” he’d squeal, gleefully sinking his face into the cat’s soft belly). PLEASE bring him back. Mac and I can only stand a baby behaving exactly as we must have for a little while longer.

Then it’s Glenfiddich and Benedryl time. For us.

Simon’s got the baby.

We Minored in Film

Geeking Out Over Film & TV

“It's not what you look at that matters, it's what you see.” ― Henry David Thoreau

What if you spent every day looking for One Beautiful Thing?

Sweet Monotony
A Girl In Europe

A blog by Robyn Christi

We'll meet at the point our paths cross.